The August issue contained an excellent Article on Australia’s Fraser Island written by John Ashley. In the Article noted the success of the Custom Charter Boat “Mistress”. The Boat came back to it’s home port on the Gold Coast for Xmas and some maintenance and returned to fish Fraser from mid February to the end of June 2018.

We finished up fishing a total of 92 days for 199 Marlin comprising 150 Pacific Blues, 19 Heavy Tackle Striped and Black Marlin, and 30 Juvenile Black Marlin. That represents an average of 2.16 Marlin a day over a lengthy period which is excellent by any standard. During what appeared to be the peak period of July December we were on an average of 2.7 per day. This in itself is a little unusual as the peak period for Blues on the Gold Coast only 200 miles South is February to May? The currents and winds at Fraser during these months weren’t particularly favourable so that is perhaps why we saw a different peak over the 12 month period.

It does bring into focus the fact that the Fraser Fishery is only lightly explored at this stage. Boats straightlining past the Island on the way to or from Cairns had usually caught something but no one had fished the Continental Shelf outside Fraser for any lengthy period of time until “Mistress” did so last year.

Although “Mistress” has been very successful to date there will undoubtedly be more learned about the Grounds, the best locations, and the typical peak periods as we and other boats explore the area further.

There are also some other very interesting aspects about the area. The Heavy Tackle Blues, Blacks, and Striped Marlin are all in very good condition and “fatties” compared to those found only 200 miles South on the Gold Coast. This undoubtedly is a consequence of the massive quantities of bait prevalent in the area. Strikes from all Species were extremely aggressive by comparison with elsewhere I have fished and this in combination I think with the Tornado Lures we use, and our Hook Rigs led to a Strike to Tag ratio in the low 80%`s, which is quite remarkable.

There is a Juvenile Black Marlin Fishery in the shallows just outside Breaksea Spit and the Northern end of Fraser which has produced prolific numbers over the years, and which is regularly fished by day fishing Trailerboats from Hervey Bay because it is within their range. The best day on these grounds was the Tagging of 30 by the Privateer “Allure”.However during our period at the Island we caught these Juvenile Blacks down to weight of under 3kg ( 6.6lbs ). Australia’s leading Gamefish Marine Scientist Julian Pepperell believes these fish are of the order of 3mths old and as we were catching them in June/July implies that they were spawned around March. This is clearly outside the Cairns/ Great Barrier Reef breeding period of Sept/Dec with it’s peak in Oct/early Nov. Thus it is reasonable to assume that there is another breeding period for Giant Blacks somewhere near Fraser Island. I dare say that one day as a consequence of more fishing effort in the area it will be found. In the meantime we kept the Heads of two little baby Blacks so that Julian can examine them and confirm their age.

During our period at Fraser we caught two daily slams ( Blue, Black, Striped ) without deliberately attempting to do so. Had we specifically fished for Slams we probably would have had a dozen or more.

“Mistress” also won the Hervey Bay Gamefish Club Tournament against 40 odd competing boats for the second time in 3yrs (2015,2017). In 2016 we were second after a countback based on time.

In short an absolutely extraordinary fishery which will only produce even better than the already spectacular results as we and others learn more about it. 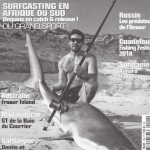