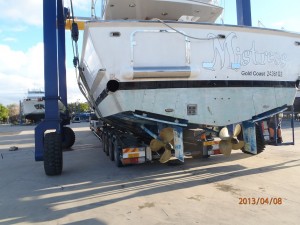 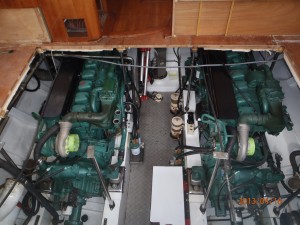 Hi all, as some of you may already know Mistress is out of the water and undergoing a major refit.  She is having a big birthday after 12 years of chasing blue and Black marlin along Australia’s east coast from Cairns to the Gold Coast.

On the list are new engines, a new generator, re furnished interior, new LED lighting, and a full paint job.

She is out of the water on the Gold Coast.  Work is being done by Captain Brett and Steve, who was involved in the building of the boat some 13 years ago in New Zealand.  Mistress came out of the water three weeks ago, and already the original engines have been removed, the generator is out and the tower has been removed.  The refit will be completed by August, ready for the Cairns heavy tackle Black Marlin Season.

Progress reports and photos will be posted as they occur.

We still have days available for the Cairns Black Marlin Season so get in quick and be the first to experience fishing on this beautiful vessel, with all her new jewellery .

The Queensland Game Fish Association Inc. (QGFA) has awarded Barry Alty with the “Champion Angler Overall” for the most tagged & released billfish for 2011/2012.  He was awarded a sensational trophy by the QGFA during the last QGFA AGM, in Mooloolaba, that was graciously accepted on his behalf by the Gold Coast Game Fish Club Inc. attendees.  Barry’s efforts & achievements for Queensland Game Fishing this year have not gone unnoticed and he is duly deserving of this award.