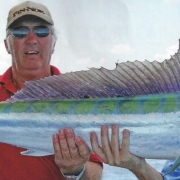 The northern reaches of Queensland’s Hervey Bay, and the even more remote waters east of Fraser Island’s northern tip seldom see much ﬁshing pressure. Although these grounds are revered as fish rich hotspots for a multitude of pelagic and reef species, their remoteness keeps their full potential still somewhat undiscovered.

For many years the northern end of Hervey Bay has been renowned for producing an extraordinary run of baby black marlin over the shallow inside grounds during late winter and spring. In recent years, the offshore waters have also gained a reputation for their exceptional numbers of blue and striped marlin during spring and early summer. This heavy-tackle ﬁshery has lured Gold Coast gameboat Mistress to spend several months running liveaboard charters to these remote grounds. This year they were there in June and discovered a surprising number of tiny black marlin in the bay, catching some as small as 2kg and seeing others so small they proved difﬁcult to hook.

The discovery of these baby black marlin at that time of year is remarkable because it does not match with the timing of the species’ currently—known spawning off Cairns. Considering the phenomenally fast growth rate of black marlin, the marlin caught by Mistress in Hervey Bay during June would have been only two to three months old, whereas fish spawned off Cairns in October/November would be far larger. This has led Dr Julian Pepperell to suspect that another black marlin breeding ground must be located much closer to Fraser Island than Cairns, with a separate spawning event occurring in perhaps February or March.

Dr Pepperell has requested anglers catching these tiny black marlin to keep and freeze the heads of a couple of specimens so that their otoliths (ear bones) can be extracted and examined to more precisely determine their age. This will help lead to the discovery of their other breeding ground, and that will have huge ramiﬁcations for anglers wanting to find the giant parents. 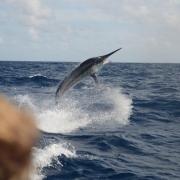 The recently recognised world-class marlin fishing ground off the continental shelf from Hervey Bay could become a mecca for game fishers around the globe, according to an industry specialist.

Barry Alty, the Gold Coast-based owner of game fishing charter boat Mistress, said the fishing ground off Fraser Island was one of the most prolific in the world.

He said last year they recorded an average catch rate of more than two marlin a day, a feat that could not be achieved anywhere else in the world over such a prolonged period.

“It could be one of the best and biggest blue marlin fisheries in the world,” Mr Alty said.

He said it had long been known there were good numbers of juvenile black marlin up to a year old near Fraser Island but because of boat sizes and distances, there had only been a modest fishing effort on the edge of the continental shelf.

“The more we learn about the grounds, the more we’ll catch,” Mr Alty said.

He said because of the variety of marlin in the region, another lure for anglers was the chance of a ‘slam’ – catching three different species in one day.

Already game fishers have travelled from as far as America and New Zealand to tag
and release marlin on the Fraser Coast and Mr Alty said it was a tremendous tourism opportunity for Hervey Bay.

“Game fishers travel the world to fish in the best or different locations,” he said.

Mr Alty said anglers spent between $2500 and $3500 a day to charter a game fishing boat and it would be for a minimum of three days on the Fraser Coast due to the distance to the fishing ground, which was about 120km from Urangan and 40km east of Fraser Island.

He said many fishers also brought their partners who stayed in local accommodation and visited tourism attractions in the region.

“Regardless of where people come from, they will normally stay longer than the period they are chartering for, particularly if from overseas,” Mr Alty said.

“Hervey Bay has the added tourist attractions of a Fraser Island visit and whale watching, which may keep visiting anglers around for a while.”

Last year, the biggest blue marlin caught from Mistress weighed an estimated 7001b, or almost 320kg.

Mr Alty said Hervey Bay had similar potential as Kona in Hawaii where the development of the marlin fishery led to an explosion in the number of hotels, restaurants, apartments and charter fishing boats.

“I believe Hervey Bay could establish a major tourist industry from game fishing and bring considerable income to the area,” he said.

Mr Alty said there was also a possibility of the Fraser Coast establishing a giant black marlin season.

He said some black marlin as small as 2kg had been caught, which was significant because it meant they were probably only two to three months old, so it was likely there was a spawning ground near Fraser Island.

It may well lead to another giant black marlin season outside the traditional September to November Cairns breeding period,” Mr Alty said.

There are plenty of fish for everyone and I expect that as we ﬁsh the area more we will all learn more and enjoy an even greater level of success.”

He said the tournament attracted boats from as far away as southern NSW, Cairns charter companies and anglers from New Zealand and Western Australia. 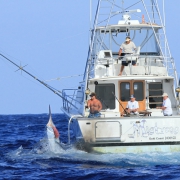 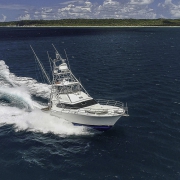